Extended Season Growing:  How to get the most out of a Garden Tower!

The design of the Garden Tower allows soil temperatures to stay productive even in cooler climates for extended growing seasons.  The soil in the Garden Tower warms up earlier than conventional gardens and the high volume of soil present can effectively maintain healthy growing conditions much longer than traditional container gardens.  The Garden Tower is designed specifically to maintain a stable internal climate for worm-driven composting.  Taking simple steps to prevent the effects of frost and freezing on exposed plant tissues allow the user to keep producing food very late into the winter months.

In Indiana, veggies that tolerate low temperatures have been kept growing with minimal protection until nighttime lows fall below 25 degrees (f)!  Results and requirements will of course vary according to regional climate and weather. 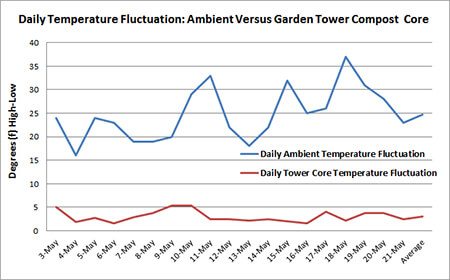 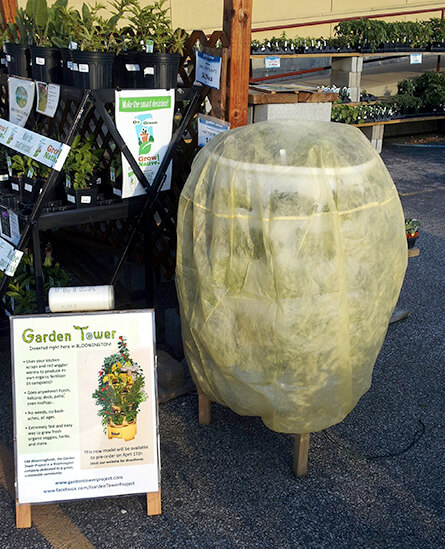 Veggies and herbs such as spinach, lettuce, kale, collards, beets, dill, cilantro, and parsley all can be extended using a variety of methods.

Breathable hoods can be purchased or constructed to protect plants from frost down to about 25 degrees (f) or lower in many cases.  These hoods allow light penetration and help trap heat emitted from the Garden Tower at night (protecting foliage from freezing).

– Locate the Garden Tower near a building that retains heat

– Plant greens, herbs, and other veggies that are cool-season producers

Caring for Red Wigglers During the Winter:

– Red wigglers are most productive at composting in warmer temperatures (up to about 95f), but can tolerate near-freezing temperatures

– At the end of the growing season, removing the compost from the center tube and moving it to a well-drained hole in the ground covered with straw, mulch, or woody debris and adding some kitchen scraps will over-winter the Red Wigglers outside of the Garden Tower

– Compost and worms can be relocated inside during the winter, where the composting process can continue productively and without odor (http://en.wikipedia.org/wiki/Vermicompost)