Get ready salads, homegrown cukes are on the way! Homegrown cucumbers have thin, tender skin that you usually won’t need to peel. Cucumbers plants are fast-growing. This cool, summer, salad “must” is very easy to grow, and there is a cucumber variety to fit everyone’s preference.

General Information
Cucumbers can be classified into two categories:
1. Pickling types are usually stouter and have drier skins that are ideal for absorbing pickle brine.
2. Slicing cucumbers have thinner, less bitter skins and longer fruit. Pickling cucumbers can be eaten like slicers, and slicers can be pickled when young.

MONOECIOUS cucumbers have both male and female flowers on any given plant, while GYNOECIOUS has only female flowers. Therefore, a pollinator plant with male flowers is required for fruit production. Because gynoecious plants put energy into only female, fruit-bearing flowers these varieties are generally very productive and fast to mature. In the absence of male pollen, some varieties (parthenocarpic) produce seedless fruit. Often parthenocarpic varieties are gynoecious or have a high percent of female flowers.
Cucumbers produce a chemical called cucurbitacin, which produces a slight bitter flavor mainly concentrated in the skin that causes minor indigestion in some people. Varieties with less of this chemical are referred to as “burpless”.

When to Start Outside
Direct-sow outdoors 1-2 weeks after average last frost, and when soil temperature is at least 60°F, ideally 70°-90°F. If starting indoors, sow 2-4 weeks before average last frost. Cucumbers are sensitive to root disturbance, so sow them in biodegradable pots that can be directly planted in the ground without disturbing roots.

Soil
Soil should be light, well-drained, fertile, and rich in organic matter.

Fertilizer
Apply a slow-release, balanced fertilizer comprised of equal parts nitrogen, phosphorus, and potassium to the soil before sowing. Since the root system is extensive, fertilize the entire growing area evenly, as cucumber roots are susceptible to fertilizer burn when fertilizer is applied too densely around the base of the plant. If you are growing in the Garden Tower™ 2 Vertical Ecosystem, the plant food you put in the soil initially and the worm castings will work great!

Special Care
Cucumbers are heat sensitive. Several days of temperatures in mid 90s or more can prevent fruit set. Consider providing afternoon shade using other crops or a shade cloth if heat is a concern. Non-parthenocarpic varieties are dependent on pollination by bees. Sowing bee-attracting flowers in the area can attract bees and therefore increase yield. Otherwise, hand pollination of these varieties will be necessary. To hand pollinate, transfer pollen from one male flower to several female flowers using a paintbrush or similar tool. Female flowers have a miniature fruit at the base of the flower, while male flowers do not. Cucumbers, and other squash type plants, are susceptible to powdery mildew. They need to have a lot of air circulation around the vines and leaves.

Harvesting
Do not let cucumbers get too big, as the plants stop producing if there are overly mature cucumbers on the vine. Pick them regularly before the fruits are bigger than optimal size for the particular variety. Cut the stem rather than pulling at the fruit to break off. Once picked, immediately immerse in cold water to disperse “field heat”, which increases the quality and life of picked fruit.

Storage
Store dry fruit in a plastic bag in the refrigerator for up to a week. For best quality, pickle or eat fresh as soon after harvesting as possible.

Check out this comparison chart from Botanical Interest: 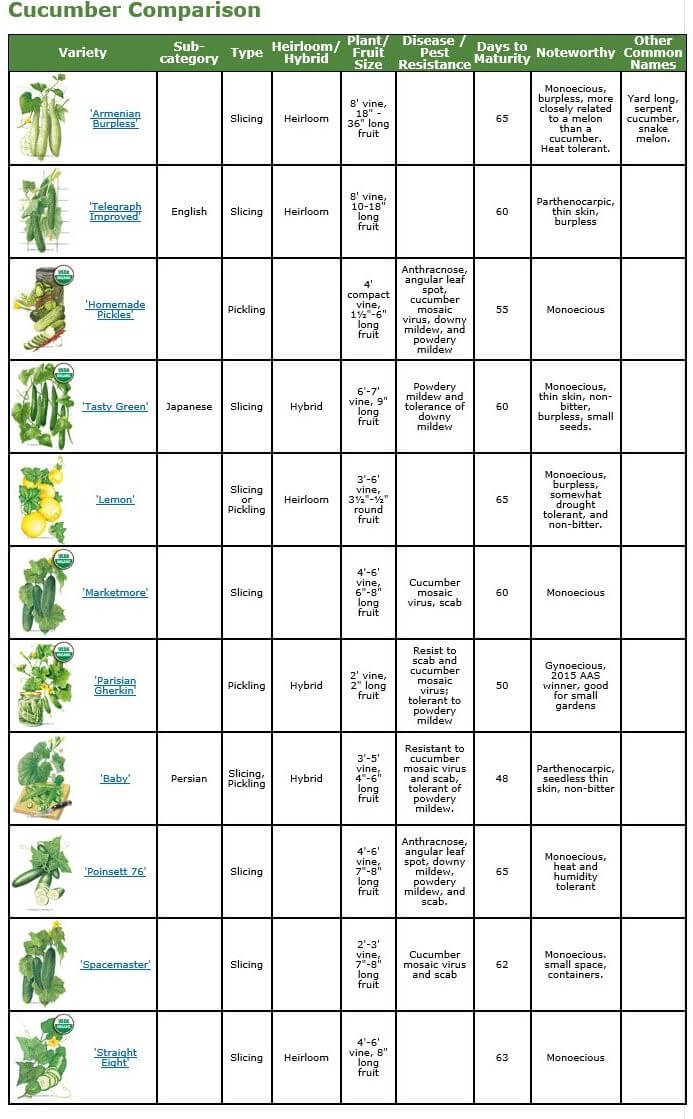