With seeds of hope and dreams of food abundance, my wife, Andrea, and I purchased a 4.5 acre homestead in south-central Indiana this Spring. For fun, we’ve gardened together a few times before, at the apartments we’ve lived in and at our city-house where we were the neighborhood weirdos, killing our grass to build garden beds. But most of our days were spent as research-academics and science-writers — I’m a political-economist and Andrea’s a neuroscientist — so jumping onto acreage has been a real eye-opener about just how hard it can be to try to grow our own food. But why would we try to do that, in the first place? 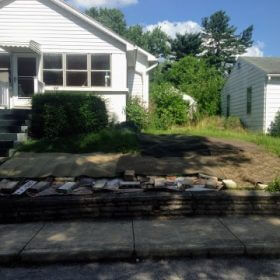 Full disclosure: I’m on a serious weight loss kick and really into smoothies. But, aside from that, and in all seriousness, we’re lucky enough to live above the poverty line, most of the time, but it’s not like we can casually afford to stock our fridge from the summer and winter farmers markets every week. We were both lucky enough to get scholarships for school but, it’s becoming more evident all the time that degrees aren’t guarantees for jobs or income. Well, at least our wilder neighbors were happy with the back garden results! And, a forebodingly, both of our parents suffered great losses during the late-2000’s Financial Crisis. Now they’re never going to retire, because of popular yet truly chaotic systems that failed, outside of their control and regardless of their meticulous financial responsibility.

So, sure, we’re aware of Tesla’s latest innovations in electric cars, home battery banks, and solar roofing tiles. And we both lead grassroots nonprofits that fight for community rights and community decision-making power. Andrea, as president of the Center for Sustainable Living, and me, as chair of the Bloomington Food Policy Council. We’re still all hopped up on hope that humanity will turn this ship around, get itself together, and make a future we can all live in. But, as critically-minded people and data-driven scientists, we’re not exactly holding our breath!

Simple facts: the State of California produces staggering percentages of America’s food supply. It’s subject to drought, natural disasters, and supply-side struggles related to immigration and union politics far beyond the scope of this note. Also, if domestic or international crisis slowed or stopped the trucking industry, many towns have 3 days (or less) before significant food shortages begin to occur. And, just to add a global perspective to the mix, the UN Food and Agriculture Organization (FAO) estimates that the Earth has about 60 harvests left, given the current methods and rates of agricultural production. If finding these facts unsettling somehow earns me my “tinfoil hat”, then somebody please take my money and buy me shares of stock in Reynolds Wrap’s holding-company.

Why try to homestead and grow our own food? We have a handful of reasons. How did we get a homestead, with meager means? We have some steady income right now and interest rates on mortgages still make some sense. So why not go for it? As fate would have it, the “perfect property” just outside of town, came up in an email list we belong to, so we “carpe”-ed the “diem” and took the plunge. After a month-long scramble to schlep our stuff to the small limestone house and seemingly-endless (4.5!) acres, we could finally get our food game going, but we were a little too late, in more ways than one. 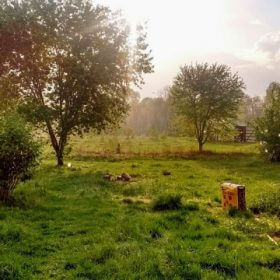 We knew we needed plant starts and we wanted to learn the whole process, so we kicked off with some seed germination. As green shoots popped through the loose potting mix, we knew it was time to prepare the crop rows, both in the back field and the greenhouse near the house. But, Holy Basil! We were in for a shock. The greenhouse hadn’t been used for years, so the soil had mineralized and the watering system for the row crop field had been shredded by a tractor, and long since grown over with weedy grasses. All while the farm tools, kindly left behind by the previous owners, were mostly rusted or busted. Our dreams were decimated and our game was gone, before we’d really begun. Fail! Panic! Chaos!

What to do? We busted out the measuring tape, calculators, and graph paper, and we measured the areas of the field and the greenhouse to make rough estimates of the resources we’d need and to get things into working order. That would just about break the bank. So what now?

Well, in 2012, I’d seen a friend’s Facebook post about some foodie thing called a Garden Tower. Being a bit of a local food freak, I helped back the project and got a Garden Tower 1 for myself, and one for my parents. I’d grown some greens and some herbs in it before, but I was kind of lazy and didn’t put much thought into it at the time. But now when conventional food-growing infrastructure was out of reach, despite going all-in on the homestead, what was this thing I had sitting in the carport and what could it really do? Could it grow the food that I needed?

Since I live in Bloomington, Indiana, the birthplace of the Garden Tower, for years I’ve been hearing stories from friends and neighbors that their Garden Towers are great food-growing planters. Growing 50 plants in 4 square feet sounds pretty darn convenient (way more than I had tried before) and lots of folks tell me they’re making their money back, in fresh food cost-cutting. So, as a world-aware scientist and community autonomy advocate, what am I to do? Test! Study! Experiment!

After talking it through with Andrea, we contacted the Garden Tower Project, to see if they had a bulk discount or something, but when we told them our story, it seemed that serendipity was at work. They were looking for a third party to independently test their new towers. Here we were, two scientists-turned-farmers wanting to test out some new food growing infrastructure! It was a win-win: Garden Tower Project would donate some Garden Tower 2™s, if we would agree to share all the data from our experiments. Hence, we got 6 Garden Tower 2™s and the first adventures of Fable Farms Indiana (the name we gave our homestead) truly began: 2 towers for 100 veggies, 2 towers for 100 artisanal herbs, and 2 towers for 100 of those irresistible summer-strawberries. We’ll be measuring all the produce that comes off of them, right down to the gram!

And thus, our Food Freedom Experiment was born, and Fable Farms Indiana got a fresh start.

I can’t pretend to know what’s next, but I can promise to let you know how it goes. I’m no Garden Tower expert, so if you’re just starting out, like me, we’re bound to make some similar mistakes and learn some lessons together. And for you folks who are still deciding whether or not to take the Garden Tower plunge, I hope the data from my experiment can be useful to you. If the rumors are true, we’ll be rolling in produce and cutting back our grocery bill.

Who can say for sure? All I know right now is that my towers are off to a good start: blooming with greens and herbs and berries. But I’m also hunting down cabbage beetles on my kales, deterring berry-stealin’ deer, bushing out the bolting basils, and navigating local nurseries to be sure I keep our towers full, budding, and blooming, now and for months to come!

So if you want to see what a Garden Tower 2™ can do in the hands of an amateur homesteader, then join me on the great adventure of my Food Freedom Experiment!